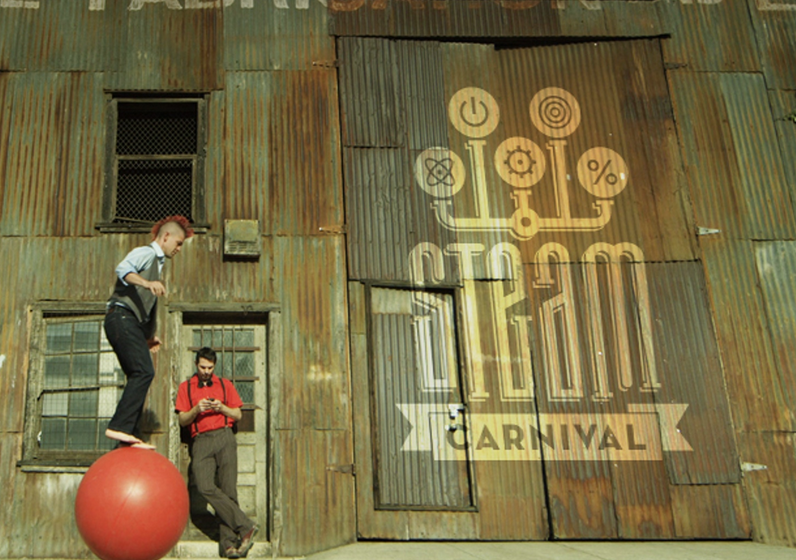 “Two Bit Circus lives at the intersection of technology and spectacle. We engineer entertainment that is imaginative and interactive, blurring the line between physical and digital playgrounds to create a new world of social amusement.”

Peek inside the huge warehouse in the very back of downtown LA’s Brewery Arts Complex, and you enter this wonderous, gargantuan garage that’s part Willie Wonka and part Batcave, with a dash of Doc Brown garage from ‘Back to the Future’ thrown in for good measure. 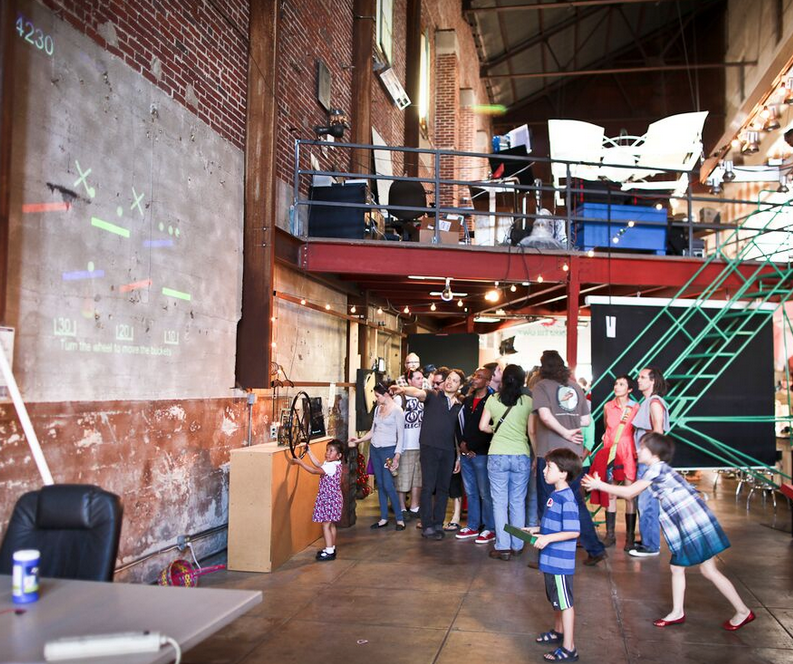 Welcome to the big top!

TWO BIT CIRCUS (link) is the brainchild of Brent Bushnell and Eric Gradman, who come from creative-oriented tech backgrounds.

Brent, the son of Atari and Chuck E. Cheese founder Nolan Bushnell, grew up surrounded by video games and entertainment. Jokes Bushnell, “I had a terrrrrible childhood! Actually, it was a lot of fun. My dad is a big kid, an engineer and entrepreneur so he raised us with equal parts all those things. We’d go to the big video game and amusement park conventions and bring back all the new stuff — so funny enough, we never played much Atari!”

This obviously had an influence on Brent, who has been a game designer all his life, and even designed a card game during high school with his brothers, which they licensed to Topps (and yes, a Chuck E Cheese costume still resides at his parents’ house).

Eric is a circus performer and roboticist who has spent the past two decades designing and creating cutting-edge art and technology, as well as performer and principal in the band Mutaytor and the sensory-overloading experience Cirque Bezerk. It was during his Mutaytor days in 2001 that he lived in the Brewery Arts center, where the band would often rehearse. 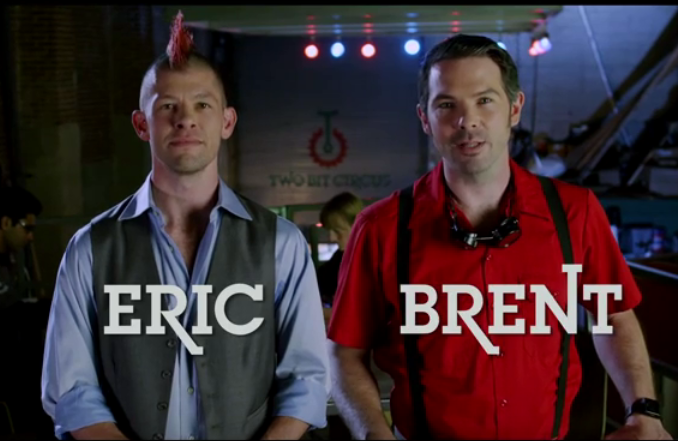 Both were in less-than fulfilling jobs at the time — Bushnell at a failed startup, Gradman in conceptual computing and robotics, inventing stuff so cool at a company with such an onerous NDA that he couldn’t even talk about what he was building.

Bushnell and Gradman met at a 2008 Mindshare meetup at a downtown bar. The two bantered back & forth with ideas online prior to the gathering, and went right upstairs afterward and started coding immediately.

They saw this huge gap in out-of-home entertainment, and started tinkering around as “a drinking club with an art problem” — hanging out with buddies and making stuff during long nights and weekends on the ground floor of Gradman’s pad.

Says Gradman, he and their pals, “Wanted to go into our garages, and come out in a couple days with something awesome.”

They always saw this huge hole in out-of-home entertainment, but explain it was a long, torturous road until the rest of the world caught up with their vision. 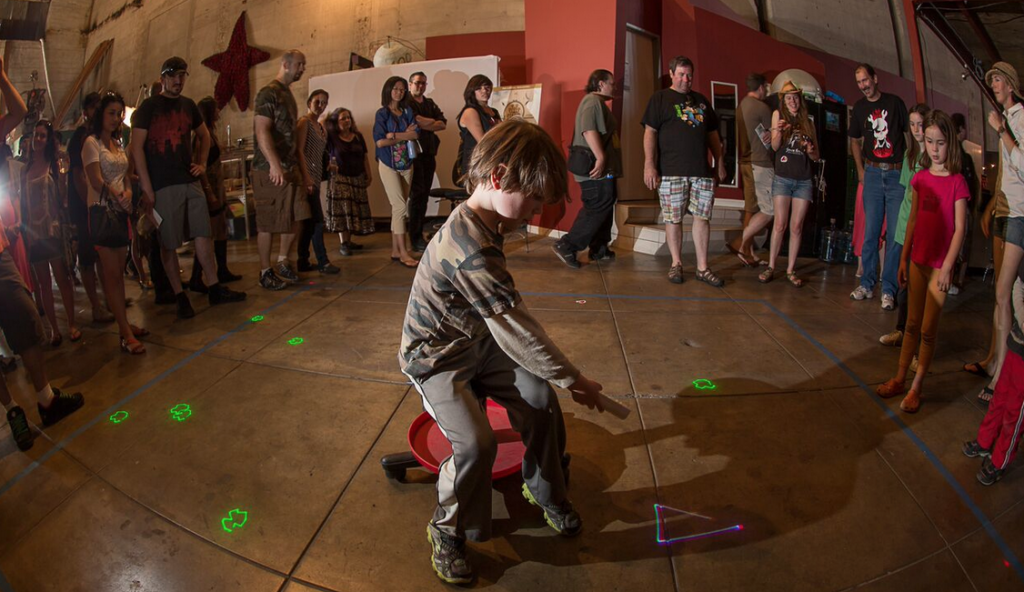 Advances in technology significantly brought down the cost and accessibility to hardware, sensors, and software so they could address an area that hadn’t advanced since the original days of Lazer Tag & Mini-Golf.

Says Bushnell excitedly about the time period, “Tech was getting awesome & accessible — it used to take a team of PhDs a decade to do anything cool in computer vision but now in a weekend, we could pull together a bunch of libraries and have a working product. You could actually take ideas from your imagination and get a working prototype quickly.”

In fact, the barrier to entry in technology is so low, that now the Circus spends time teaching kids how to do what they do! But more on that in a minute.

In the early years, they were able to land consulting work for larger companies, which allowed them to bring on teams, reinvest the money back into the company, and work on things they loved. 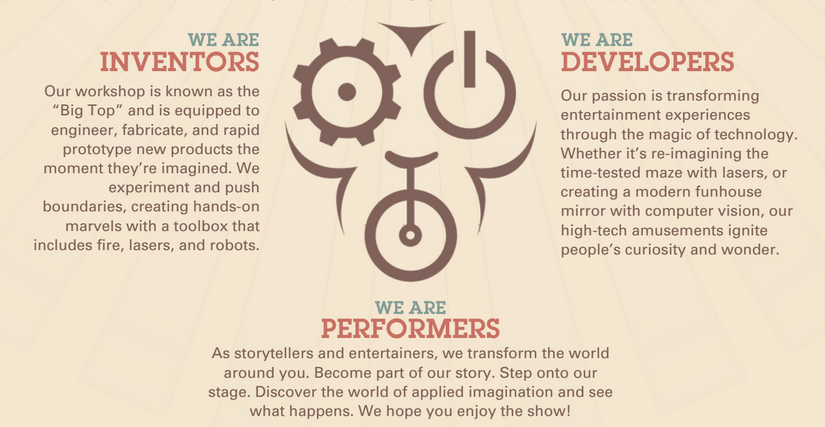 Two Bit Circus eventually moved into their current space at the Complex, which they call The Big Top. Bushnell and Gradman had no idea how they were going to pay for the space, but within six months time they had outgrown it, and expanded into a satellite space on the grounds they call the Midway game Experimentation Space. In addition to being an amazing place to work and play, the Complex has been a fertile testing ground for the Circus’s latest projects, as the general public offers feedback and inspiration during the Complex’s twice-annual open houses. 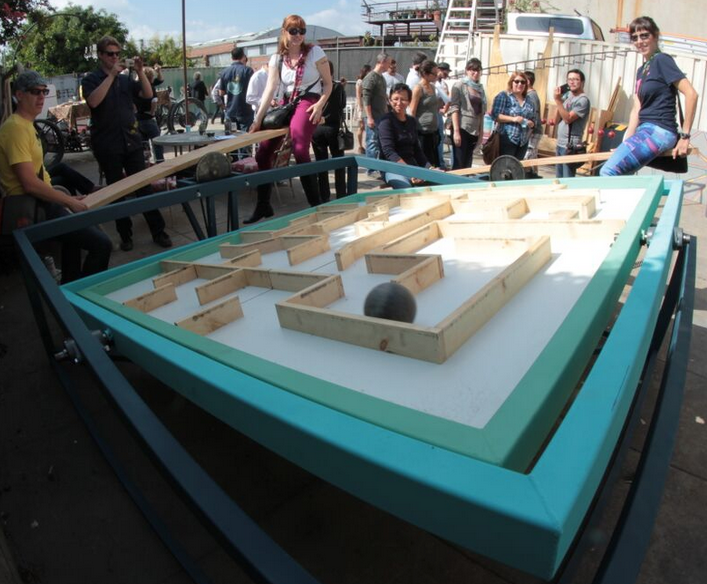 In 2011, everything went into hyperdrive when an Intel employee experienced Lazer Maze at a Mindshare event, and then tapped Two Bit Circus to bring Lazer Maze to Intel’s 2011 Science & Engineering Festival — which led to hundreds of subsequent events, including gigs for Microsoft at E3, Amazon’s holiday party, and even a party at Tesla, where the crew famously had to pull the plug on Elon Musk and his kids, who were playing a six-player game table long after the party had ended and all the other equipment had been already packed up.

By 2013, Two Bit Circus had put on so many corporate party experiences that the guys were like, “Hey, we should do our own events!”

And thus was borne STEAM Carnival (link), a multi-day, multi-experience high-tech event to entertain and inspire adults and children alike via science and lasers and and fire and robots.

One of the main cruxes of Two Bit Circus and STEAM Carnival is to build tactile experiences, even as the world goes more digital. Says Bushnell, “You can’t have all learning be just on a tablet device. Fabrication, tool use, is important. You want to be able to build with your hands, you can’t solve everything in software. For us, there’s no shortage of hard problems, but there is a shortage of talented, creative people with the skills needed to solve them.”

The success of the STEAM Carnival’s 2013 Kickstarter (link) garnered tons of support and press (Time, USA Today, Discovery Channel), which was an awesome whirlwind of activity leading up to and during the life-devouring fundraising portion — but it then required a buildout with a defined deadline AND a significant raise from partners in order to cover the rest of the costs.

The team laugh about it now, but it was quite an undertaking to put on 5 events during a 5-day event at the Port of San Pedro in October 2014, often wondering to themselves, “Are we going to pull this thing off?” to “Oh my God, we’re gonna pull this thing off!” 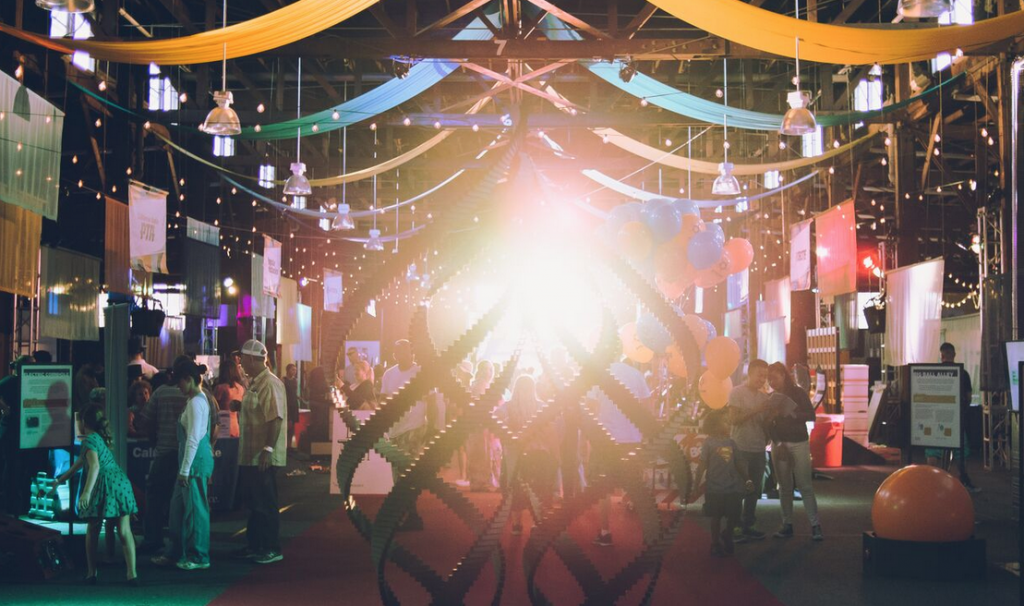 But it was huge, drawing 13,000 visitors and reaching over 21 million people worldwide. And it gave Two Bit Circus the gumption to do it again, this time taking their high-tech carnival in San Francisco, which takes place this November 6-8. (link)

The stakes are high, but the team is ready for the challenge, to take STEAM Carnival onto a much larger platform, and spread the gospel of Science, Technology, Engineering, Art and Math to children everywhere. Says Bushnell, “The Kickstarter was validation #1. Selling out Los Angeles was validation #2. And San Francisco is tech epicenter, we felt that was the right place to launch what we’re going to do in 2016,” which includes a full tour in 2016, as well as a whole slew of surprises they’re not quite ready to reveal just yet.

And to keep the fascination, discovery, and attention going long after the Carnival leaves town, Two Bit Circus is already providing UCSD-accredited materials and training for Bay area teachers to engage their students in STEM, so there is a significant impact long after the event wraps. 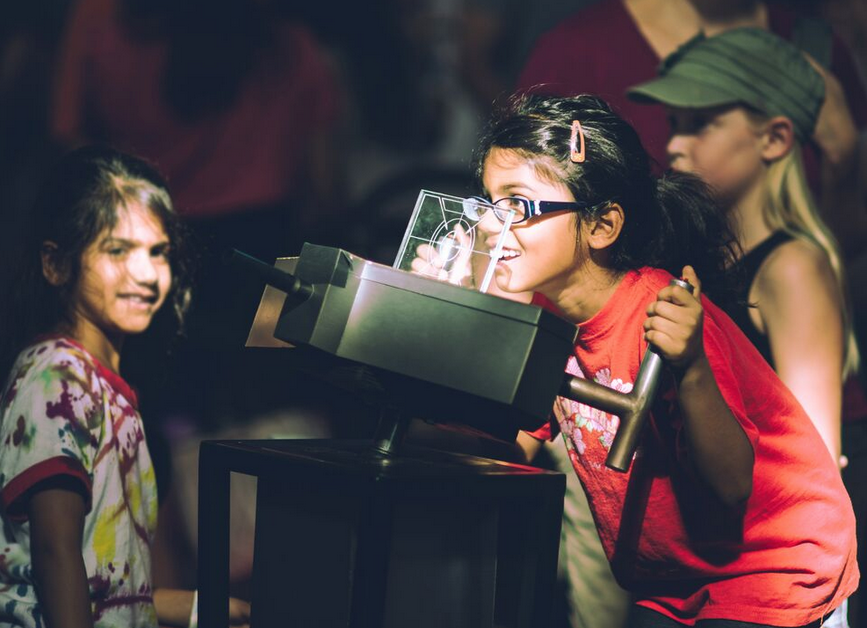 So now, in 2015, Two Bit Circus is an overnight success, seven years in the making, with a full-time staff a couple dozen strong, with dozen more contractors brought on as needed.

In addition to STEAM Carnival, the team have a whole bunch of other projects in the works, including Story Room (link), where you and a group of friends enter an abandoned science lab to figure out what happened to a missing scientist, recreate his final experiment in order to save the world within an hour’s time. Story Room is currently being housed in their other space at the Brewery Arts loft, but will be deployed in a large partner facility in the new year. 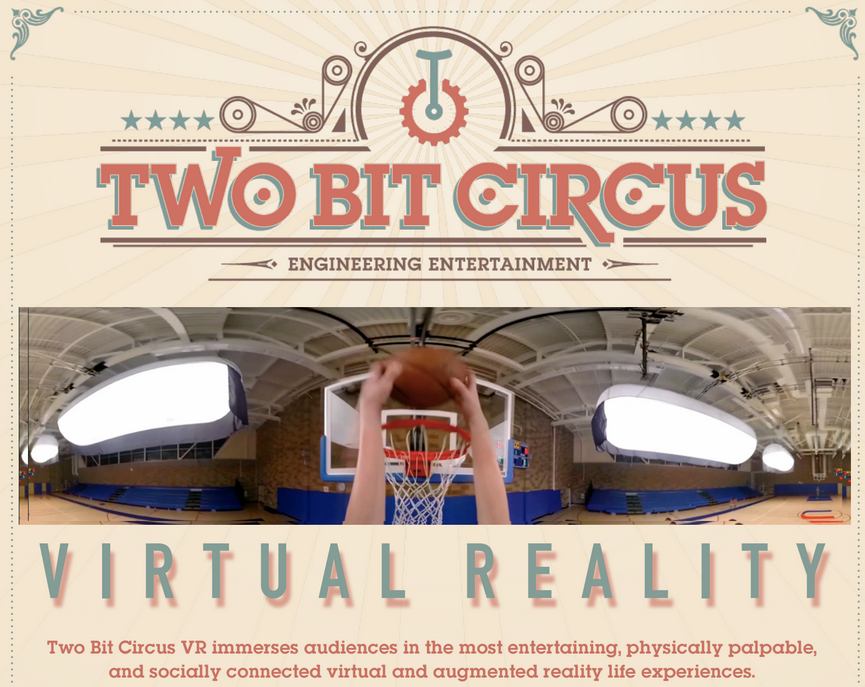 Two Bit Circus is diving heavily into VR with Chief Content Officer Nancy Bennett, having developed experiences for Indy Racing League (which is on tour all year), the NFL Touchdown Experience during the Super Bowl, the Samsung Olympics Experience Tour, and the NBA All Star Game.

And of course being in LA, the team has been approached by over 40 production companies, so expect a couple of television shows next year, as well as fully dedicating their efforts into their YouTube channel (link).

Says Gradman of their previous experiences on TV shows like Extreme Makeover: Home Edition, “We love doing what we do and we love telling people about it — we’ve never had any difficulty getting up in front of people and explaining how much we love building stuff.” Adds Bushnell, “Part of our mission in inspiring kids is to say, ‘Hey this stuff isn’t just for nerds anymore!’ This is the new rock n roll, this is super awesome and fun, and anyone can do it.” 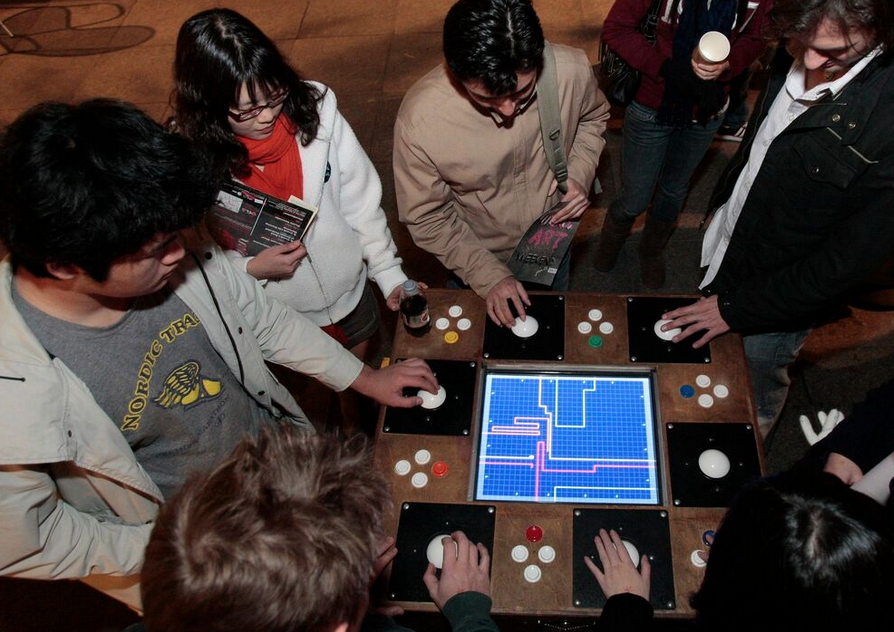 The two go on to explain how the City has been such a great partner and supporter, in helping tell LA’s story and help draw in more talent as the tech space grows.

And even as they continue to build wondrous creations from their labs at the Loft, they do have a particular interest in taking over a nearby space — the Lincoln Heights Jail.

Says Bushnell, “We’ve met with District 1 Councilman Gilbert Cedillo, and are excited about talking to them about ways we can work together and grow. We feel like there’s an opportunity to turn East LA into an innovation epicenter and hope to collaborate with them to pull that off!” 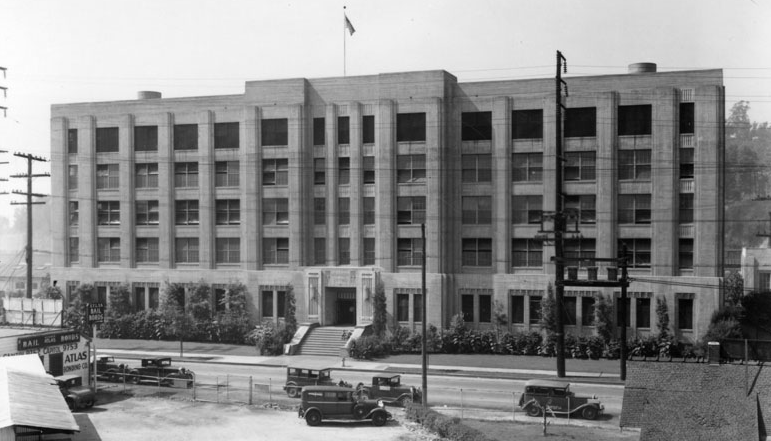 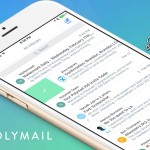 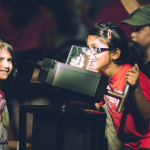 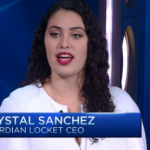