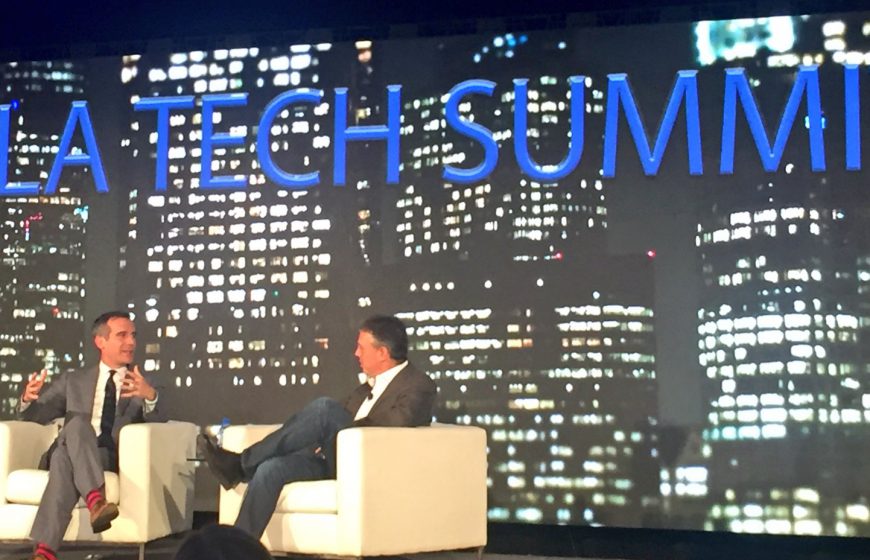 Cornerstone on Demand brought together the area’s best & brightest for its fourth annual LA Tech Summit, once again hosted at the Fairmont.

Davis talked about Loot Crate’s incredible trajectory, growing from shipping Avengers cologne as one of its first mystery box items to having none other than Iron Man himself, Robert Downey Jr, as an investor a mere four year later.

Davis detailed advantages and challenges along the way, from building community on social channels, empowering customers as brand ambassadors by delivering great experiences, to dealing with port strikes and maintaining a strong company culture as they have scaled to nearly 300 full-time employees.

Lasky talked about Riot’s growth trajectory, which took the team from a dingy warehouse to the leveraged entry investment, which lead to a full acquisition, by China’s Tencent (which parallels Instagram’s early buyout by Facebook), as well as the secret metrics which took his daughter’s interest in Snapchat to meeting founders Evan Spiegel and Bobby Murphy, who were working out of Spiegel’s father’s house with a staff of ten at the time.

Lasky praised Snapchat’s rollout of Stories, admired Spiegel as a constant inventor, and hinted at a future product flow that is very unique.

And although he is excited for the future of VR, Lasky did express concern regarding the big-name rollouts so early in the adoption curve, noting the lag time between buzz and mainstream adoption of mobile games as a corollary.

Garcetti hit every single right note when it came to tying LA’s tech community as the enabler of quality of life improvement for all, citing LA Clean Tech Incubator and GeoHub as private / public successes, as well as LA’s ability to retain more engineering graduates as the city has grown to become the third largest tech hub in the world.

.@LACIncubator is now the largest clean tech incubator in the world, we're working to make it cheap & easy to launch a biz #latechsummit pic.twitter.com/5GbAI1D3bR

More than a couple rooms were standing room only, which clearly illustrates interest in LA’s fast-growing tech ecosystem, which is layering over the numerous verticals which drive LA’s economy, from entertainment and transportation to shipping and manufacturing, to health care, retail, services, and more.

In addition to talks dedicated to VR, AR, drones, and Hollywood convergence, Cedars Techstars graduates Silversheet, Home Hero, and Applied VR discussed the futures of healthcare, while ZipRecruiter and ChowNow talked about the challenges of scaling their startups for success.

Attendees connected over cocktails at The Bungalow at day’s end.